St. Thomas the Apostle Catholic Church was officially founded on November 6, 1950. The parish was the 12th in the Phoenix area and was originally part of the Diocese of Tucson. It was to grow to become one of the largest in the Valley by the time the Diocese of Phoenix was established.

Before construction began, the parish’s first Masses were held in the auditorium of Madison School on 16th Street and Missouri. There were 250 registered families at that time who were in the new parish as a result of being carved from the St. Agnes and St. Francis Xavier parishes.

On November 19, a building committee was chosen, and arrangements were made for the construction of the church. The parishioners broke ground January 14th, 1951, for the church, which is now the Parish Hall. It was completed 10 months later.

During this time several parish organizations began to develop and grow, such as Sodality, St. Vincent de Paul, scouting, and a men’s “Holy Name Society.” Years later, on August 15, 1959, the parish began the building of the church we have now. It was finally constructed and ready for use in 1960. The building we know now as the church is the centerpiece of the parish campus. The Spanish colonial style tower rises 105 feet from the ground to the top of the cross and has become a recognizable landmark in this area. The building is in the traditional cruciform design, in the shape of the cross, permitting more worshipers proximity to the sanctuary.

Through each generation, we have tried to provide a church which remembers its past and looks forward confidently to many years of service as a place of divine worship for parishioners and the community as a whole. We are very proud to present to you our parish. We invite you to explore St. Thomas the Apostle and to feel welcome here. Our goal is to invite you to journey with us, rejoicing and celebrating the many and varied gifts of God. 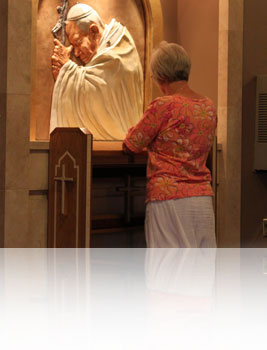